a bit of a rant 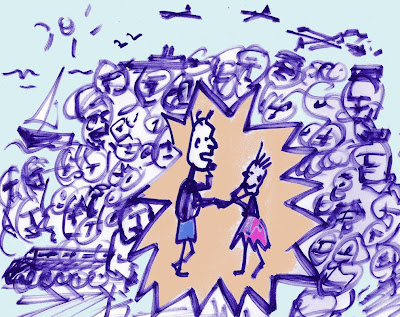 In the continued absence of the smart and talented half of AnElephantCant (if the brain isn’t here, guess which part of the elephant you are left with), I feel like a bit of a rant.
We are all aware of the dumbing down of the English language, in whatever flavour we use it.
The ever increasing use of email stripped the written word of much of its form and formality (and I confess to being as guilty as anyone in this) with the omission of pronouns, punctuation and even capitals.
Now the use of text has created a whole new language, much of it well-nigh incomprehensible to old fuddies like myself, and has wiped out almost entirely all previous notions of spelling and grammar.
This is not necessarily a bad thing per se, but I do wonder when ‘text’ became a verb and created the ugliest and most unpronounceable word in the language in its past tense.
Texted! Really?
But I am much more dismayed by the collapse of proper pronunciation in much of our day-to-day speech.
Here in Scotland this has, I believe, always been the case to some degree.
The omission of the ‘g’ at the end of ‘-ing’ is a widespread example of this, but the most common is the glottal stop which replaces the ‘t’ or even ‘tt’ in the middle of a word.
This is applied even in the name of our own country, Bonnie Sco’land!
We also lose the ‘t’ from the end of words, giving us cannae, willnae, dinnae and disnae.
And don’t get me started on such linguistic atrocities as ‘gauny’ or the execrable ‘um ur’ which in some circles seems to have replaced ‘I am’.
(My apologies to non-Scots speakers here – some of that must be utterly unintelligible.
And now onto the English!
By this I mean mispronunciations not found in Scots speech, but widespread among TV folk.
Let’s start with the much-abused letter ‘r’.
It is often omitted when it should be pronounced, as in poor, which becomes poo-wah.
Think also of door, car, sore, and pretty much anything ending in the comparative –er.
It is like a mass audition for the ‘Fwee Wodewick’ scene in Life of Brian!
Now, to be fair, this callous abandonment is compensated by the apparently spurious addition of the wretched ‘r’ to words ending in ‘aw’.
Think saw, claw, flaw and that famous Scottish footballer, Denis Lore.
If the family pet hurts its foot, imagine the consternation over its poor paw!
A more recent abomination is the emphasis on the internal ‘g’ in words like singing and ringing. In fact, it is pronounced as though there is an additional ‘g’, giving sing-ging and ring-ging. Why?
Do some morons think it is posh?
Or do posh people think it is moronic?
And what about the letter ‘h’?
Yep, aitch is now pronounced with a leading ‘h’.
Haitch.
Why?
What on earth possesses folk to just change a word?
Are we going to start breathing fresh hair?
Be all hakes and pains?
Maybe drink a pint or 3 of real hale?
I would also like to mention words that are used wrongly.
Recently every semi-literate sports ‘expert’ uses the expression ‘begs the question’, when he really means ‘raises the question’.
Begging the question is something quite different, meaning to imply the answer in the question itself.
I suggest you look it up.
My last comment is more of an observation.
We in Scotland now use ‘never’ in place of ‘not’ in many situations.
I never saw him last night.
I never went to the match on Saturday.
And perhaps especially in a denial – no, I never!
So it appears to be used for emphasis, for when ‘not’ just isn’t convincing enough.
This is what happens when the good old ‘f’ word is so overused that it no longer has any impact!
End of rant. For now.
Posted by anelephantcant at 05:13